Columbia Club of South Texas invites you to a private wine tasting event with David Keck, Master Sommelier and Columbia University alum, at Camerata at Paulie's on Saturday, July 23rd from 3 to 4 pm. Learn about wine and enjoy fine food while networking with fellow Houstonians!  $30 per person: RSVP. 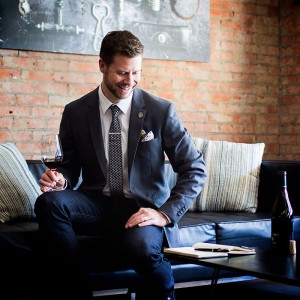 In the Camerata at Paulie’s, David Keck wants to provide an unpretentious meeting place where guests can enjoy delicious beverages that are made by people not companies, and speak of the place where they are grown, harvested, fermented, and bottled. Gin Braverman handled the interior design. She is most known locally for designing the beautiful Oxheart space, as well as bars/restaurants in New York. Food is limited to fine charcuterie and cheese options.

He left New York City to work two years as a professional opera singer. He completed his Master’s Degree in Opera Performance at the Shepherd School of Music at Rice University. While traveling for singing, David pursued his passion for wine, tasting extensively in New Zealand, Austria, Italy, France, and of course throughout the United States. Following studies at Rice, David pursued wine exclusively, receiving further education and certification through the Guild of Sommeliers. He recently received his Master Sommelier Certification through the Court of Master Sommeliers, after winning the Rudd Scholarship. He was also first runner-up in the 2012 Texas’ Best Sommelier Competition at TEXSOM, and placed third in the National Finals for the 2013 TOP|SOMM competition in May in San Francisco. Most recently David worked as the Beverage Director for the renowned Uchi Restaurant Group.