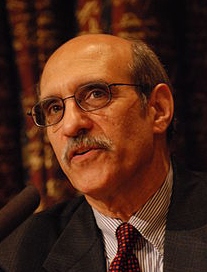 Join us at a Reception for Professor Martin Chalfie

Friday, January 8 from 5 to 8 pm
- Sponsored by Slalom Consulting and the Columbia Club
- Held at Slalom's offices in the Galleria area
- 2200 Post Oak Blvd, Ste 1450
- $20 per person includes appetizers and drinks
- Professor Chalfie will give a brief overview of his work.

Martin Chalfie is a University Professor at Columbia, and a leading member of the Department of Biological Sciences. He holds a Ph.D. in neurobiology from Harvard University, and has been a faculty member of Columbia since 1982.

In 2008, he shared the Nobel Prize in Chemistry for his introduction of green fluorescent protein (GFP) as a biological marker. The protein GFP has become a fundamental tool of cell biology, developmental biology, genetics and neurobiology, and has been used to study basic biological principles and investigate disease processes in model organisms.

Chalfie has served as a gifted mentor to a generation of undergraduate and graduate students, and played a crucial role in strengthening the Department of Biological Sciences as its chair from 2007 to 2010. As a Nobel laureate, he has represented Columbia on the international stage, becoming a vocal advocate for basic research and training in the sciences and serving on a variety of scientific advisory boards across the world. A fellow of the American Academy of Arts and Sciences and a member of both the National Academy of Sciences and the Institute of Medicine, Chalfie is a widely published author and sought-after speaker who has earned the admiration and respect of the University’s faculty and students for more than 30 years as the consummate scientist, teacher and colleague.